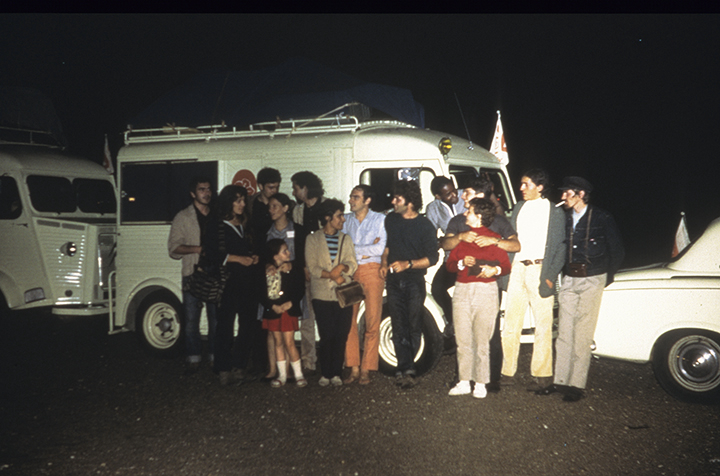 The First Caravan, which had started from Paris on 15th August 1969, climbed, after 4 weeks of adventurous driving through 7 countries, the famous Khyber Pass, which guards the entry to the Indian Subcontinent. If Istanbul marked the end of the West, the Khyber Pass signalled the end of the East, or probably the Middle East, even if Afghanistan is not really a part of it. We were now entering the territory of India, whose borders extended once from Kabul up to Cape Comorin. Pakistan did not impress us very much. After the cheap restaurants in Turkey, Iran and Afghanistan, where we found only kebabs that we washed down with bad tea, Mzaled (Krishna) and I had a memorable sumptuous meal in the magnificent Lahore Sheraton.

We crossed the Indo-Pakistani border in the evening, then after driving all night, the following morning we reached New Delhi, the capital of India.

At that time, New Delhi was still a provincial town, with its long shady avenues, its magnificent parks brightened up with Mughal mausoleums, and its roundabouts full of flowers. There was not much traffic and tourists had not yet overrun Connaught Place (which is called Rajiv Chowk today), or India Gate – probably one of the most beautiful perspectives in the world today together with the Champs-Élysées.

We took our breakfast in a large café at Janpath, among hippies who were in a kind of stupor after a night spent in smoking joints. But “serious” matters were already starting to take place: at the Lodi Hotel, we met a delegation of representatives from Auroville, who had especially come from Pondicherry by plane. They spoke of this “historic moment”, of a “universal mission”, of a “moment of destiny”. But I do not remember much any more: Auroville hardly ever interested me; and from the time of my arrival in India, I was in suspense, confusedly expecting something from destiny.

In the late afternoon, they took us for the night’s stay outside the town in a small ashram*, which was a branch of Sri Aurobindo’s main ashram at Pondicherry. We found it to be a beautiful, traditional Indian house, like the very few that are found in New Delhi today, with a huge room where the photos of Mother and Sri Aurobindo found pride of place (the materialists were stricken with apoplexy), high ceilings striated with large teak wood beams, finely worked grills on all the windows and a huge terrace coated with lime. Outside, the hundred-year old tamarind trees bent their leafy foliage over a splendid garden of roses. It was evening, the time when India magically quietens down: the heat diminishes, the noises die down one by one and the whole country gathers together, turning to itself in a festival of pujas and aartis (religious ceremonies) before nightfall.

Suddenly, I never knew why, I got hold of the book The Life Divine by Sri Aurobindo (translated by the Mother), climbed on to the roof of one of the Citroen vans and spontaneously sat down cross-legged, like a yogi. Some images will remain frozen in my mind for ever: the sun was just setting in the horizon, in a riot of red and orange colours, the green paddy fields in the background; in the distance, one could make out the silhouette of a peasant returning from the fields, his plough’s wooden ploughshare on his shoulder; thousands of Indian magpies (minahs) were chirping shrilly in the mango trees. All was silent. The world slowed down its eternal rhythm before sinking into that unconsciousness which makes us forget all our troubles, all our sufferings. And suddenly, a strange peace descended on me. An Olympian calm!

An absolute conviction! Without thinking, without objectifying myself for a second, I randomly opened The Life Divine, read a few lines – I will never remember which ones. And in a flash, everything was revealed. Everything was understood. I infallibly knew that I had arrived THERE at the place where I had to be. That by an extraordinary miracle of destiny, or thanks to the infallible precision of the “inner caravan”, I had reached this El Dorado, which I was confusedly searching for so long a time. By reading three lines, I became conscious of eternity; of those unknown worlds, which always beckon us, without our realising it. I understood and accepted the concepts that were totally unfamiliar to me – at least in this life: karma, reincarnation, avatar…I was in India. At last! This was my place; the country to which I belonged. Auroville was my city, there where I would live till the end of my days. I was born for it.

“I HAVE COME HOME”, I simply murmured to myself.

When I collected my wits, night had fallen. I climbed down again from my perch, entered the large room and sat down for a long time before the photos of the Mother and Sri Aurobindo, my “masters”.

“I am prostrating at your feet,” I silently said to them, without really daring to do so, while the materialists looked at me curiously.

– How strange it is, I thought before falling asleep: in the space of a few minutes, my entire life has changed course. Eighteen years of uncertainty, sorrow, sufferings; and then a moment of eternity, all has gone, all has been erased: a new slate; you do not look back any more. I had just taken the caravan of inner internalisation, the caravan to eternal India.

Next morning, we resumed our journey: there remained two thousand kilometres to be travelled and eight States to be crossed before reaching Auroville;

Qualities of a Ruler